Scientists and policymakers agree that global environmental change needs to be studied in a more integrated way. This is because the workings of the Earth system involve strong interactions among the atmosphere, ocean and land (including the major role of ecosystems), and because human activities are impinging on these workings to a degree that implies major human consequences.

The Analysis, Integration and Modeling of the Earth System project, or AIMES, is a core project of the Future Earth. AIMES develops innovative, interdisciplinary ways to understand the structure, dynamics and evolution of the complex system composed by natural and social worlds in intimate interaction. Key foci are to understand and quantify the consequences and feedbacks of human activities and ecosystems with biogeochemical cycles and the climate system, as well as anticipatory scenario analyses informed by climate science collaborations with paleo-environmental scientists, archaeologists and historians to develop a better understanding of Earth-system changes and human-environment interactions. 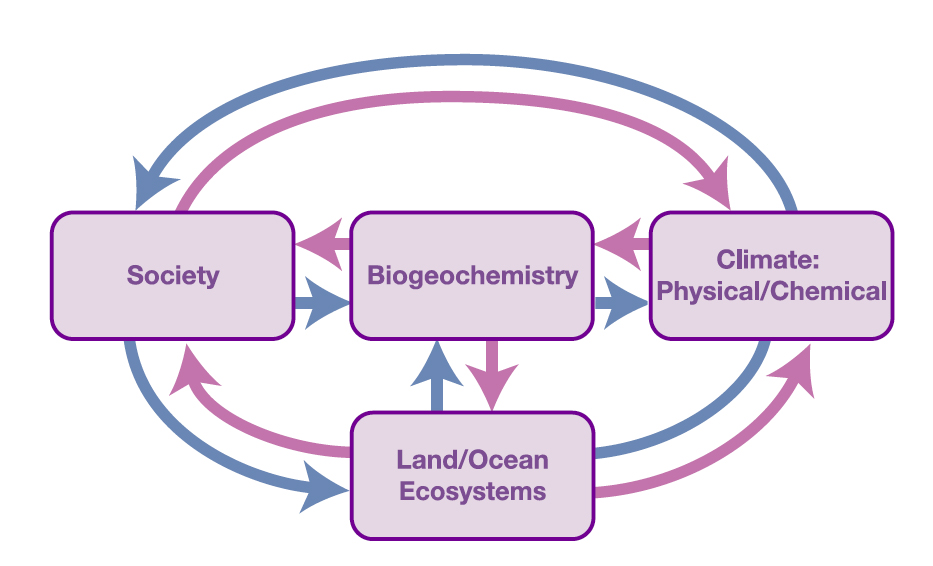 Conceptual diagram of Earth-system interactions. Understanding the Earth system requires an unprecedented degree of integration between the biological, physical and social sciences and the humanities. Blue arrows represent AIMES’ holistic role, red arrows the in depth role for other global environmental change activities.
There is a growing recognition within the research community that global change must be studied in a more holistic, interdisciplinary and integrated way than before. Crucial to the emergence of this perspective is the increasing awareness of two aspects of Earth-system functioning. First, that surface layers of the Earth – atmosphere, ocean and land – operate as a coupled system, within which the biosphere is a highly influential component. Second, that human activities are pervasive and profound in their consequences; they modify the physics, chemistry and biology of the Earth at the global scale, in ways that have the potential to feed back on human society. Thus humans can be considered not only as external forcings but also, more realistically, as fully embedded players in a coupled, dynamical system. This emerging perception is challenging the way in which research on the analysis and modeling of the Earth system is organized, from the level of individual research groups and institutions to the international global-change research programmes. The integration challenge – to understand human and environmental interactions – is the driving force for AIMES. The role of AIMES is represented by the linkages depicted in the figure to the left, especially the blue arrows indicating effects that have not been a major focus for other projects or programmes. The figure implies a need for close collaboration and communication with other projects and programmes in the international science community – in particular, with the members of other global environmental-change programmes – with a shared goal to develop transdisciplinary approaches to understand our life-support system and our role within it.