Location: Virtual
Dates: POSTPONED DUE TO ILLNESS. We have paused registrations and will open them again once we have a new date.
Register: https://www.eventbrite.co.uk/e/tipping-elements-discussion-series-ice-sheets-tickets-195061884347 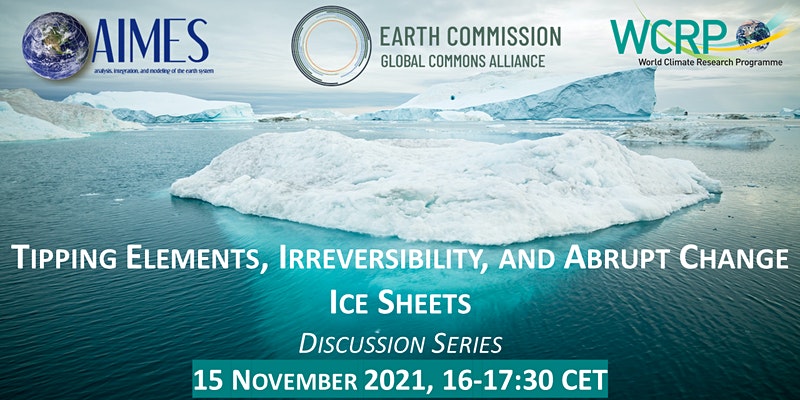 This event will focus on the ice sheets:

The final 20 minutes is reserved for informal discussions on the research agenda and the development of a Tipping Element Model Intercomparison Project (TipMip). The event will be recorded.

This event is free of charge, but please register. The event will be recorded.

Sophie Nowicki, University of Buffalo
Dr. Sophie Nowicki is an Empire Innovation Professor in the Department of Geology and RENEW Faculty. Her research focusses on the Greenland and Antarctic ice sheets, their connections to the Earth’s climate system and their impact on sea level. Her work is aligned with the RENEW Climate Change and Socioeconomic Impacts focus areas.

Through applied mathematics, remote sensing observations and numerical modeling, her work spans the spectrum of local processes, such as understanding the physics of ice sheet grounding lines, or the impact of bedrock topography on ice dynamics, to that of large-scale continental ice sheet models and their use in projections of sea level change. As sea level projections from ice sheet models require knowledge of atmospheric and oceanic conditions that drive ice sheet evolution, Dr. Nowicki is also interested in how to improve climate models in the polar regions, as well as the use of multiple models for projections.

Prior to joining UB, Dr. Nowicki was a Research Scientist and Deputy Chief for the Cryospheric Sciences Laboratory (Code 615) at NASA Goddard Space Flight Center, Greenbelt, MD. While at NASA Goddard, Sophie was a science team member for Operation IceBridge, and co-lead the SeaRISE (Sea-Level Response to Ice Sheet Evolution), an international effort that investigated the sensitivity of the Greenland and Antarctic ice sheets to external environmental forcings. She led many competed efforts such as an effort to couple ice sheet models to the two Goddard climate models (i.e., GEOS-5 and ModelE), and an effort that investigated the feedbacks, processes and impacts of contemporary changes in the Arctic using satellite observations, ice sheet and climate models.

Dr. Nowicki is a member of the NASA Sea Level Change Team (N-SLCT), a member of the SEARCH Land Ice Action Team (LIAT), an executive committee member for the Ice Sheet Mass Balance Intercomparison Exercise phase 2 (IMBIE2), a member of the Community Earth System Model (CESM) Scientific Steering Committee (SSC) and co-leads the Ice Sheet Model Intercomparison Project for CMIP6 (ISMIP6). She is the Division Head for Ice Sheets for the International Association of Cryospheric Sciences (IACS) and a member of the World Climate Research Programme (WCRP) Sea Level Change and Coastal Impacts Chand Challenge. She was invited to be a lead author on the IPCC 6th Assessment Report Chapter on “Ocean, cryosphere, and sea level change”.

Dr. Nowicki holds a Ph.D. in Theoretical Glaciology from University College London (UK), an MSc in Remote Sensing and Image Processing and a bachelor degree in Geophysics from The University of Edinburgh (UK). Over her time as a scientist, Dr. Nowicki has received numerous awards including that of NASA Cryospheric Sciences Most Valuable Player, awards for Outstanding Publications and Scientific Achievements. She is most proud of her mentoring award (the Robert Goddard Honor Award for Mentoring) which recognizes not only her work with postdocs and young scientists, but also the amazing work that they did.