AIMES, with its forerunner (IGBP-GAIM), and WCRP partner (the Working Group on Coupled Modeling, WGCM), have been instrumental in the evolution of climate models into Global Earth System Models (ESMs).  AIMES has supported the development and evaluation of ocean and land carbon cycle components, and will continue to do so through its MAREMIP  and iLAMB activities, respectively.  AIMES and its SSC members, have led the development and intercomparison of fully coupled climate-carbon models (Cox et al., 2000; Friedlingstein et al., 2006). As a result of these efforts, the IPCC 5thAssessment Report, (IPCC AR5) will contain results from ESMs (i.e. coupled climate carbon-cycle models). Through one of its co-chairs (Cox), AIMES is providing the key assessment of the carbon cycle simulations in these models to the IPCC AR5.

AIMES has begun to focus model evaluation on the aspects of current climate that matter most for the future, using the new concept of emergent constraints (Collins et al., 2012). Emergent constraints use an ensemble of ESM results to relate an observable aspect of the current climate to an aspect of future climate system sensitivity that we need to know. The original example of this related a model’s simulation of the seasonal cycle of snow-cover in the northern hemisphere to the strength of its snow-albedo feedback under future climate change (Hall and Qu, 2006). 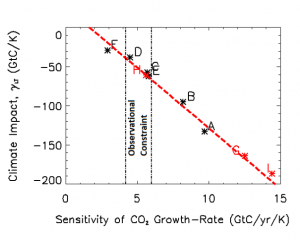 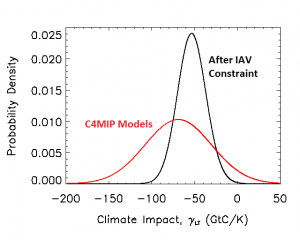 More recently, a similar emergent constraint has been found relating the loss of carbon from tropical lands to the sensitivity of the annual atmospheric CO2 growth-rate to variations in the mean tropical temperature – providing an invaluable constraint on the risk of tropical forest dieback in the future (Cox et al., 2013, see above).